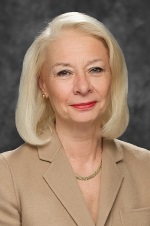 Helen Polatajko was appointed to the Board of Governors on October 2, 2018 and serves as a member of the Finance and Audit and Governance and Human Resources Committees.

Helen has over 40 years of extensive experience in the technology and financial services fields. She has experience in both the private and public sectors across North America, most recently consulting with Payments Canada on their Modernization Program, specifically the replacement of the national Core Clearing and Settlement System, 2 years as CIO at Canada Mortgage and Housing Corporation, and for 14 years, serving as Senior Vice President and CIO at CIBC Mellon upon moving from Houston, Texas, and her role for Mellon Mortgage Company as CIO.

Helen is currently Chair of the Board for Tafelmusik Baroque Orchestra and Chamber Choir, and is a member of the CDSPI Board and their Risk Committee.
Helen previously sat on the Canadian Advisory Board of the CIO Executive Council, the Advisory Committee of the Conference Board of Canada, and the Council of CIOs. From 2008 - 2015, she also served on the Board of Directors for the Independent Electricity System Operator (IESO) for Ontario, and on the Independent Advisory Committee for the Ontario Ministry of Government Services.

She has been recognized as one of the Top 100 Women in Computing, acknowledging her achievements and contributions to information services and technology, and was the Executive Sponsor of WIN (Women’s Initiative Network) while at CIBC Mellon. In addition, Helen was featured on the cover of CIO Canada for an article titled "Fusing Business and Technology”, and for five years served on the judging panel of the Canadian Information Productivity Awards (CIPA).
She received her Bachelor in Science in Mathematics and Psychology degree from The University of Pittsburgh in Pennsylvania, and graduated from The Stonier Graduate School of Banking at the University of Delaware. Helen also holds certification from the Institute of Corporate Directors.