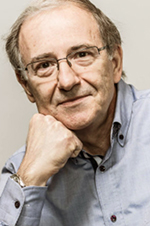 Professor George Tourlakis was appointed to the Board of Governors on July 1, 2018 and serves as a member of the Academic Resources and Land and Property Committees.